Awesome day out in Porterville

Awesome day out in Porterville 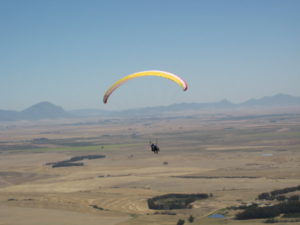 We have had quite a lot of windy weather lately so like the good, dedicated paraglider pilots we are….we chase the weather. Saturday found us sitting in Hermanus, clouded in, raining…bugger. The coffee was good and the whales were going crazy, leaping out of the sea.

Anyway, Sunday, bright and early we loaded up the car and headed for Porterville. Most of the Cape Town pilots had the same idea and Pete, Stephan, Gerard, Gaynor (aka Flygirl) and Barry were a few of the familiar faces out there.

The day was slow to start and we scratched for about half an hour just trying to stay up. Wayne bombed out but we managed to hang in there. Then the day started improving and we got some solid climbs up to about 5 or 600m above take-off (not sure exactly cos I wasn’t looking at my vario, just listening to it tweet). Citrusdal was in gliding distance when my passenger started complaining that he was feeling a bit air sick. So, although we were at the front of the pack and at the top of it, we turned around and headed for the road. An hour and a half later and about 20km down the ridge, we landed and packed up.

Wayne and Willy (who had gone back up for a second flight came flying overhead soon after and landed in the same field. Both pilots were still gagging to be in the air but we had had a great day and we headed back to Cape Town.