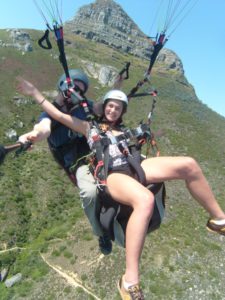 Lion’s Head is probably the most well known of the Cape Town paragliding launch sites, and for good reason.

At 669m, Lion’s Head is a popular hiking trail and offers 360 degree views from the summit.

Lion’s Head has magnificent views over Camps Bay and Clifton beaches and out along the twelve apostles and Table Mountain.

On a good flying day we are able to soar above the summit of Lion’s Head and longer flights are possible. It is sometimes possible to cross over to Table Mountain, soar up the cliffs and along the twelve apostles.

Flights to Llandudno are not uncommon and the occasional flights to Kommetjie are also possible, crossing back into Hout Bay, flying over Chapman’s Peak and landing at the end of Noordhoek Beach. 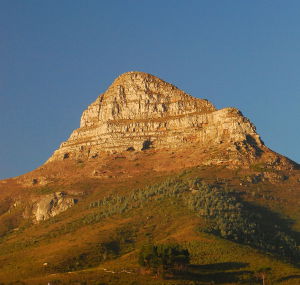 a preview from the Fresh Air Site Guide © Greg Hamerton
Grading : BASIC + 4 guided flights (Hang-gliders : C)
GPS : +- S33º56’18” E18º23’14”
Altitude : Top site 450m (asl), ceiling at 1200m asl
Description : Home of the Glen Paragliding Club, a consistent and beautiful site to fly, offering a panorama of Camps Bay and the Twelve Apostles. In the afternoon, Lion’s Head heats up and generates a thermic, upslope breeze. Parking is on the back (CapeTown side) of Lion’s Head, then a stiff hike is required up the gravel road and around to the front side. Because of the spire-shape of the peak, the wind diverges around it, causing a strong increase in wind speed at both takeoff sites when it is soarable. The wind is usually crossed from the left (S) at the topsite and very strong, and crossed from the right (NW) at the lower site. Don’t pioneer a new launch site somewhere else on the mountain.
Wind : W-SW, thermic lee-side in SE
Launch : ‘Lower launch’ is reached after a 10 minute walk, where the path narrows from a jeep-track width into a hiking track. It is a challenging launch through a silver-leaf tree grove from a short net-covered runoff. Be meticulous in your layout and pre-flight checks. This is where to launch if it is soarable and SW. The ‘Top site’ is reached after another 10 minutes of brisk walking (it is NOT on the top of Lion’s Head! It’s below the cliffs on the NW side). It is a rocky netted launch site that is both steep and loose underfoot. The wind is usually crossed from the left here, making good ground-handling and committed launch techniques essential for a safe get-away.