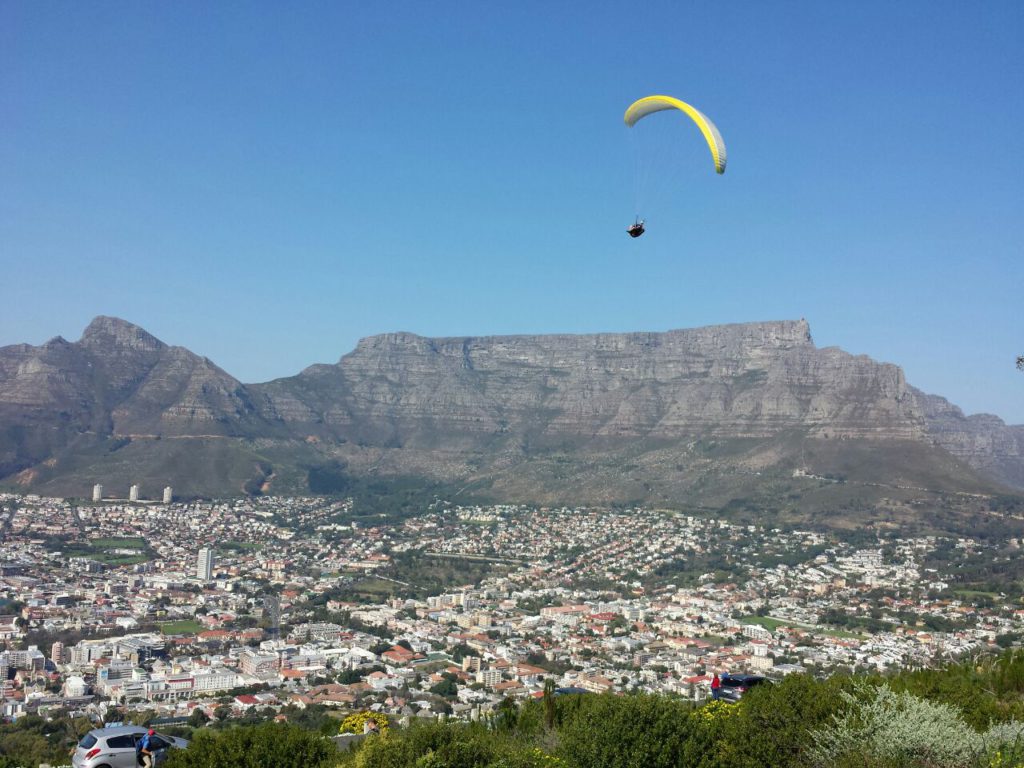 I was walking with my wife and kids in Newlands forest when I received a message from Stephan – “TM?”.

Stephan and Pete were already up on the front face reporting light winds and thermal cycles. Eventually, after paying R95 for a one way trip up the mountain, and walking 15 minutes along the McClears Beacon route, I found Stephan and Pete sitting at the front face with what seemed like the perfect breeze coming up the face. I had noticed the crows soaring as I walked to the launch site.

Stephan had lent me his Gradient Freestyle acro glider for the day since I am between solo gliders at the moment. Sorted out the lines, clipped in, pulled up and I was off! There was a bit of scrappy lift on the face but nothing substantial. Pushed out towards Devil’s Peak but found only sink – vario screaming in my ear. Not keen on sinking out in that direction I headed towards the Cable Station – vario sink alarm screaming even louder. Tiny bits of lift here and there that you couldn’t really turn in. Glide was pretty shocking but that wasn’t surprising given the glider is only 22m2. Flew out over Clifton beaches and threw the glider around a little bit. Quite interesting doing wing overs on an acro glider – very dynamic. Landed at La Med and packed up. Stephan had taken off after me and flew across to the Eastern side of Lions Head. He managed to soar a bit and then flew out around Bantry Bay and landed.

It was a beautiful day. The flying was not quite as good as we had hoped and we realised we should probably have launched from the McClears Beacon side to benefit from the wind direction. Ah well, another day. was fun!